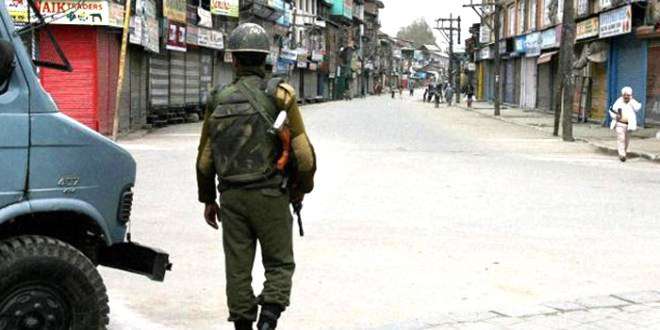 In occupied Kashmir, complete shutdown is being observed in the valley and parts of Jammu region against the killing of around a dozen Kashmiris by Indian troops in Kulgam and other parts of the territory, reported Kashmir media service.

Call for the strike has been given by the Joint Resistance Leadership comprising Syed Ali Gilani, Mirwaiz Umar Farooq and Muhammad Yasin Malik and was supported by Kashmir Bar Association, Kashmir Economic Alliance, Kashmiri Pandits Sangarsh Simiti (KPSS) and other business and social organizations.

“Indian tyranny and oppression has crossed every limit now and Kashmiris cannot tolerate this silently anymore,” the leadership said.

“Also, to highlight Indian aggression against unarmed civilians in Kashmir, JRL is preparing a memorandum to United Nations Secretary General,” the leadership said.

JRL said though New Delhi’s tyrannical measures have been continuing for decades but these have failed to break the resolve of the people of Jammu Kashmir. The leadership said the criminal silence of the international community to safeguard its trade and economic benefits is “nothing but wickedness.

The JRL has also called for a march towards Lal Chowk march on Tuesday to protest the Kulgam carnage.

All shops and business establishments are closed across the valley with very thin movement of vehicles on the roads. The authorities have deployed troops in strength at various places to thwart anti-India and pro-freedom protests. Internet services are either suspended are slowed down in the territory.

JIT finds Rs 100b laundered through over 107 fake accounts