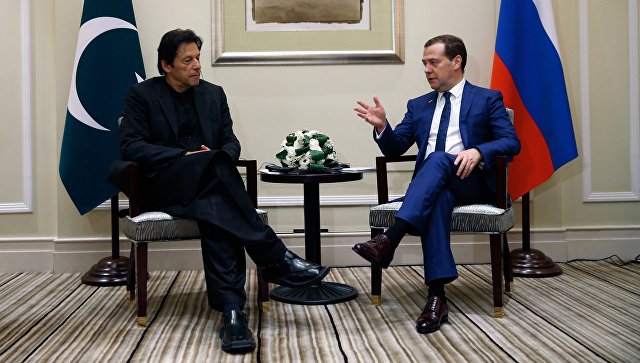 Two recent developments show that country’s foreign policy makers have started to realize the optimal way forward for Pakistan’s international relations. Prime Minister Khan during his Chin visit not only met their highest-level officials but also had a one-on-one meeting with his Russian counterpart, Dmitry Medvedev in Shanghai. The recent thaw in Pakistan-Russia relations is key regional development. The warmth in the bilateral ties indicates that Russia is acting on its strategy of developing new partnerships in the region.

The meeting between the Prime Ministers of the two states and the recently concluded military exercises that both sides had held together shows that the two countries are warming up to each other as the changing geo-strategic situation demands so. This elicited a prompt reaction from Washington as US deputy Secretary of State Alice Wells who in her recent visit stressed the need of a ‘reset’ in Pak-US bilateral relations.

This reorientation of foreign policy is a welcome move considering the historical one-dimensional approach adopted by Pakistan. The cold war mentality of global politics being a zero-sum game and ‘friend or foe’ ideology did not bear us any fruits. Pakistan enjoys a gifted geo-strategically important location on world map but has never been able to exploit it for its own advantage mainly due to flawed policies.

India is certainly a perpetually hostile neighbor in the East but there are numerous other options for Pakistan to establish ties with countries that it has historically shunned mainly in hope of appeasing USA. It is high time we realized that there are no permanent friends or enemies in the world system and Pakistan must seek cooperative relations with every country in the region and world prioritizing its own national interest. If Russia can engage Taliban for peace in Afghanistan, then why cannot Pakistan amend ties with regional powers other than US.