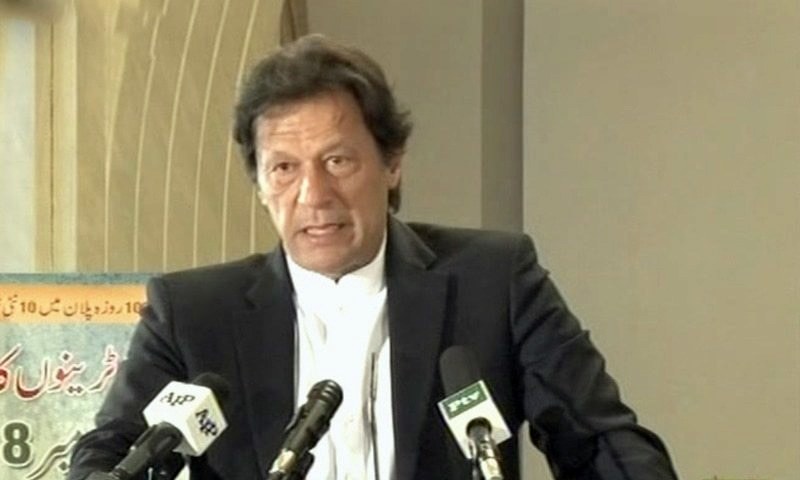 Addressing a ceremony held in connection with the launch in Islamabad, the premier said the PR was incurring yearly losses of Rs45 billion but they have decreased to Rs37bn under Federal Minister for Railways Sheikh Rashid Ahmed’s watch.

Khan said the reason behind the downfall of public sector enterprises in the country was “political appointments”.
“The loss caused by political appointments which are not based on merit is borne by the people,” he said, adding that the Rs500bn worth of losses incurred by government corporations will eventually be cut by increasing the rates of consumer goods.

Khan asked the railways minister to act against and remove the political appointees which he said have “become a burden” on the department.

He said the railways could become a highly profitable institution if people are appointed on merit.

The prime minister observed that on one hand state land worth billions of rupees, including ‘enemy properties’, has been illegally occupied, while on the other the country is “paying Rs6bn in interest payments on loans on a daily basis”.

To remedy this, he said, the government is drafting a policy to utilise the occupied state properties and turn them into revenue-generating ventures.

“We can sell several of these commercial properties to overseas Pakistanis and earn dollars for the country… to pay off our loans,” Khan said.

The Faisalabad Express will run between Multan and Faisalabad. It will make stops at Khanewal, Abdul Hakim Railway Station, Shorkot Cantonment, Toba Tek Sindh and Gojra.

The Shah Latif Express will depart from Dhabeji at 8.30am to reach Mirpurkhas at 11.40am and make stops at Jangshahi, Jhimpir, Kotri, Hyderabad, Tando Adam and Tando Allahyar. It will leave Mirpurkhas at 2.30pm to reach Dhabeji at 5.35pm.

The train will have seven economy class coaches. The fare for Dhabeji to Hyderabad will be Rs140 and up to Mirpurkhas Rs200.

War against terrorism, militancy not over yet: COAS

Terrorists involved in attack on Chinese Consulate in Karachi identified