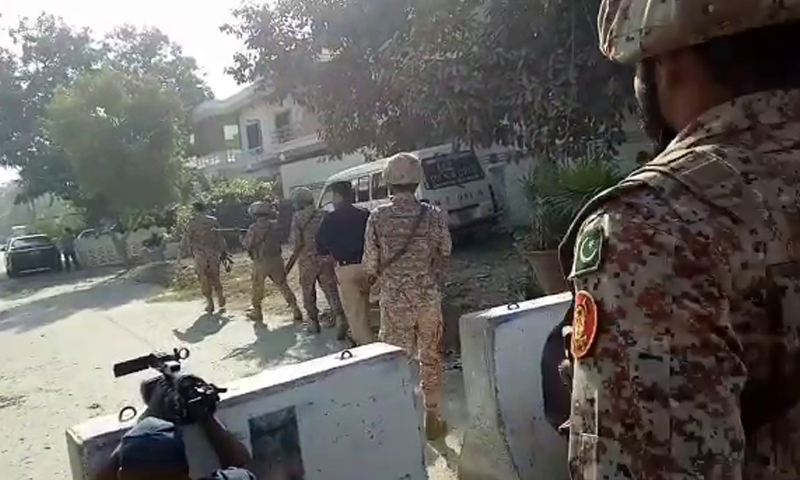 Two policemen were martyred and a security guard injured as three gunmen tried to enter the consulate around 9:30am but were intercepted by security guards at a checkpoint, Deputy Inspector General (DIG) South Karachi Javed Alam Odho said. Retaliatory firing resulted in martyrdom of two police officials, he stated.

Three suspected suicide bombers were killed before they were able to enter the facility as forces successfully foiled the attack, Karachi Police Chief Dr Amir Shaikh said. “There were three attackers and all three have been killed… They could not even get in the compound. They tried to get into the visa section,” the Karachi police chief said while speaking to the media outside the consulate.

“The men came to the consulate in a car which was loaded with explosives,” he added.

All the staff inside the Chinese consulate is safe, security sources said.

Jinnah Hospital spokesperson Dr Seemi Jamali confirmed that two bodies were brought to the hospital and said the injured guard is in critical condition.

Heavy contingents of police and Rangers have been deployed at the site of the incident and roads leading to the consulate have been cordoned off.

“Three attackers were killed,” the foreign minister said. “It was a cowardly attempt by terrorists,” he added.

“The matter is under control and the area has been cleared,” Qureshi said.

Later during the day, FM Qureshi while addressing the National Assembly said, “One of the attackers blew himself up which resulted in the martyrdom of the two policemen. Our security forces successfully foiled the attack and did not let the attackers enter the compound.”