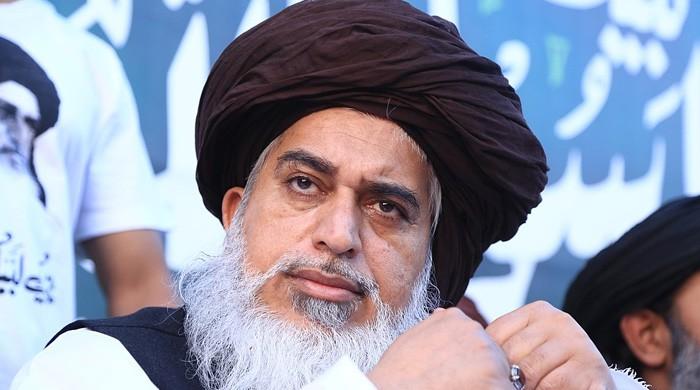 A family member of Rizvi confirmed to media that the TLP chief has been taken into custody.

“He was arrested from his hujra in Lahore,” a family member of Rizvi told Samaa TV.

Rizvi’s son, Saad, while talking to 7 News said along with his father, all district leaders of TLP have been arrested.

When contacted, Punjab information and law ministers said they did not know about any such action being taken against Rizvi.

According to police sources, a crackdown is currently underway against TLP leaders in several major cities. TLP leader Pir Afzal Qadri in a video message corroborated that police was raiding their mosques in order to arrest leaders.

At least 30 of the party’s workers have been arrested from various parts of the capital, the sources told DawnNewsTV.

Around a 100 police personnel have been deployed at Faizabad interchange, where the TLP had last year staged a 20-day long sit-in.

At least 59 TLP leaders and workers have been picked up from the Rawalpindi area, and reports say raids are still being carried out to arrest more activists of the party.

The district authorities in Rawalpindi have issued detainment orders for TLP divisional leader Inayatul Haq. According to the notification, Haq will be detained in a jail for 15 days.

The crackdown comes ahead of Rizvi’s call to party members to observe martyrs’ day on November 25. He had asked workers and supporters to gather at Faizabad in the federal capital.

The reports of his arrest come weeks after the TLP led three-day protests across the country against the acquittal of Aasia Bibi, a Christian woman whose blasphemy conviction was overturned by the Supreme Court at the end of last month.

Terrorists involved in attack on Chinese Consulate in Karachi identified