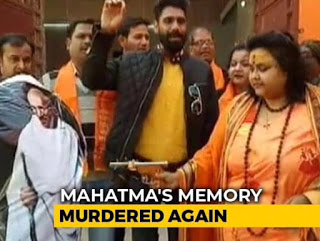 The American Weekly “Time” Date 20-26 May 2019’s International Edition has the picture of Indian Prime Minister Narendra Modi on its Title Page with the heading “India’s Divider In Chief”. There are two main forecasts in the edition, No. 1, is the winning of Modi i.e. Hindu Extremists in so-called Secular India and No. 2 the forecast of breaking apart of India into 28 independent states. Weekly Times uploaded the picture of Title Page on Twitter with the question, “Will the biggest democracy of World will bear Modi for the next five years”? The reply to the Time’s question and all those who opposed BJP was given after the telecasting of non-official results on 23 May 2019, in which BJP has secured 345 seats. 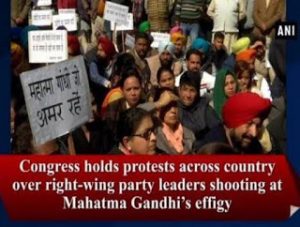 On a crowded road two persons stopped their car in the mid of the road stopping a  car behind them, then they walk near the following car and shoot down the persons in the car with full confidence that no one will interfere them, one of the car’s passengers tries escapes and he is killed with a single fire as well. The whole scene was captured into the mobile phone by someone, according to the sounds in the video it seems that the murdered person was active against BJP in the elections. Various concerns have been expressed over the identity of the killers, they seem to be professionals and officials of some govt. agency. This showed that not only for the minorities and Dalits but for the Hindus of high class having belief in democracy, secularism and human rights a hard time is ahead for the upcoming days, months and years of India. Justice Markandy Katju retired judge of Indian Supreme Courts has disclosed in his interview in February 2019 that Modi and Extremists Hindus will try to win the elections at all costs and the upcoming time will be hard for Minorities, especially Muslims and Kashmiris living in Indian Held Kashmir (IHK). 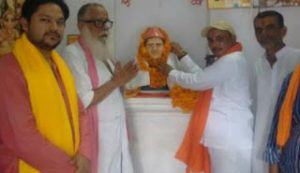 This is the first election of Indian history in which the Indian army has utilized its budget on securing votes for BJP. Indian army’s trucks were used to transport voters to the polling stations. The opposition protested over this and showed the pictures and video clips to the Election Commission in which uniformed Indian soldiers can be seen entering into the Polling stations. A uniformed SUbedar of Indian army argued with the person recording the video that he should record the video but should avoid the signs and units numbers written on the military trucks. It was clear that Indian soldiers were not worried about being caught supporting the BJP they were only worried for the identification of their unit and identification marks on their trucks. BJP’s securing of 300 seats alone was celebrated by throwing black ink on the huge effigy of Gandhi. In order to celebrate their success, the supporters of BJP had prepared big posters of Gandhi and fixed them in different parts of India. In such an insult of Gandhi by Sadhvi Paragiya Thakur in Bhopal, a representative of TV Channel asked question about the services of Gandhi for the independence and his respect in the Indian society; she replied that real hero of India is not Gandhi but his murderer Nathu Ram Godse who murdered the traitor of Hindus, therefore, it is the time to make corrections to the Indian history. 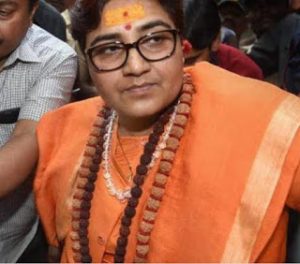 It should be kept in mind that Sadhvi was arrested by Indian Anti Terrorist Squad of Maharashtra in 2008 for bomb blasts in Malegaon, Ajmer Sharif, Hyderabad Dakkan and New Delhi along with an on-duty Colonel Purohit and in the leadership of Hemant Karkare they were presented in the court where they confessed there involvement in terrorism. This was the time when the Hindutva i.e. Nexus of Hindu Extremists, Indian Army, Civil and Military Intelligence against the Muslim minority and Pakistan was unveiled. This nexus used to plan and execute bomb blasts within India and blamed Pakistan and ISI and Kashmiris fighting for the freedom through propaganda for these terrorist bomb blasts. Under these allegations, on the one hand, the innocent Kashmiris were abducted by Indian army while on the other hand the propaganda to defame Pakistan as a terrorist was supported by these bomb blasts. Sadhvi was released on bail after 09 years in the prison. In April 2017 she joined BJP after which the section of Maharashtra Control of Organized Crime Act was dropped which were a big hurdle in her release on bail. Now she is facing charges of being involved in illegal activities. Astonishingly despite being involved in serious allegations, her nomination papers were accepted by Indian Election Commission. BJP’s leader Amit Shah has declared the success of Sadhvi as a milestone towards converting Indian into an Extremist Hindu State. 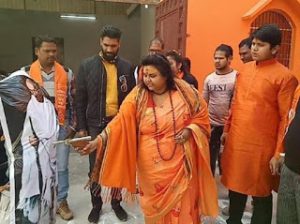 Keeping in view the mandate of 300 seats to BJP in India, foreign analysts are expressing concerns over the human rights situation in Indian Held Kashmir. They are concerned that now Modi will not only torture Kashmiris but will use unchecked killings to push Kashmiris into Azad Kashmir. They are also hoping that before starting her aggressive state terrorism in IHK, India may start negotiations with Pakistan. This will be a bitter test for Pakistan because Pakistan will neither in position to stop Kashmiris from entering into Azad Kashmir nor to reject the negotiations. On the one hand the state terrorism in IHK will be on its peak while on the other hand the propaganda will be started that Pakistan has no concerns over the situation of Kashmiris. This point will be used by the opposition in Pakistan as well. Few pro-Indian TV Channels will try to defame Pakistan army and allege that the Pakistan army is responsible for the poor situation of Kashmiris in IHK i.e. they are being punished for the bad policies of the Pakistan army. These are those traitors who have never raised their voice over the violations of human rights in IHK and Muslims of India. The upcoming time is very hard for minorities in India especially Muslims. This will fuel the freedom movements in India. This is a bitter reality that in this elections Hindu Extremists has not won the elections but “TWO NATIONS THEORY” has won the elections proving that why Quaid Azam Muhammad Ali Jinnah demanded a separate homeland for Muslims 71 years ago…

Getting Away With a Video Scandal