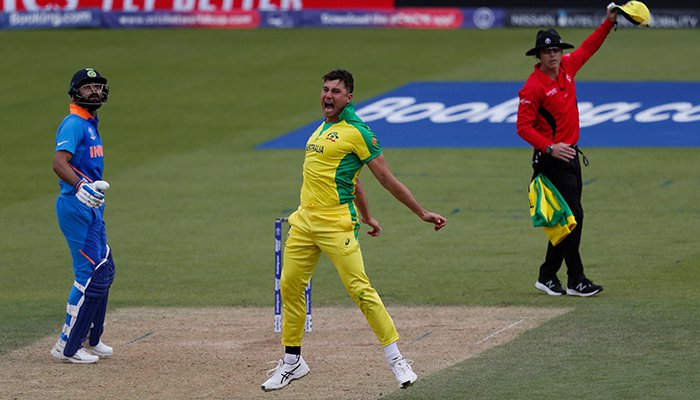 Australia’s Marcus Stoinis has been ruled out of  Australia’s ICC World Cup game against Pakistan on June 12 after picking up a side strain during his side’s game against India on Saturday. His participation in the remainder of the World Cup remains uncertain.

All-rounder Mitcell Marsh has also been included in Australia’s side as cover. However, an official replacement hasn’t been announced.

Stoinis got two wickets, conceding 62 runs in seven overs against India at The Oval on Sunday.

“He was in some discomfort. And it wasn’t ideal, but he still managed to bowl a couple of over,” Australian captain Aaron Finch told media in Taunton on Tuesday.

“Not exactly sure on how many games he’ll miss. That’s why Mitch is flying over. It’s still being assessed. And over the next couple of days, we’ll have a clearer picture of what that looks like. And also I think it was about his fifth or sixth over the other day. So it was towards the back end of his second spell, and he came back and bowled two overs at the depth,” he added.

According to Cricket Australia, Stoinis has not been officially replaced in Australia’s World Cup squad.

ICC rules for the Cricket World Cup 2019 allow an injured player to be replaced but once replaced, the player cannot rejoin the squad in any circumstances.

Australia will play Pakistan at Taunton’s on Wednesday and the absence of a second allrounder leaves Australia’s headache ahead of their fourth World Cup match.

Marsh is likely to join the squad later this week when he will arrive in the UK with Australia A side.

Africa hopes stars can shine in Egypt after officials cause shame