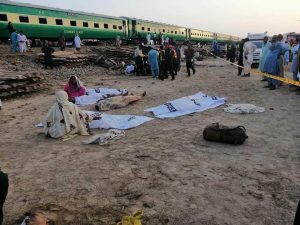 RAHIM YAR KHAN: A passenger train rammed into a freight train at a railway station near Rahim Yar Khan on Thursday, killing at least 21 people and injuring over 80 others, hospital officials said.

The freight train was stationary when the speeding passenger train struck it at Walhar Railway Station in Rahim Yar Khan, in the eastern Punjab province.

Rahim Yar Khan District Police Officer (DPO) Umar Farooq Salamat said that it looked like when the signal changed on the track, the passenger train went on to the loop line, where a freight train was parked, resulting in the accident.

Jamil Ahmed, an official in the provincial government, said hospitals declared an emergency.

Twenty people were killed in the train crash and 74 were wounded, with some in critical condition, according to Javed Ahmed, a physician treating the wounded.

Prime Minister Imran Khan ordered authorities to provide the best possible medical care to the victims and said he was saddened by the news.

In a presser following the accident, Rasheed said the collision, apparently, occurred due to human negligence; however, an inquiry commission will be made to find the truth.

Ahmed said that he had directed Railways’ general manager to reach the accident site where rescue work was ongoing. He also directed the authorities to speed up the clearance operation.

The railway minister also announced Rs1.5 million for the families of the deceased and Rs3-5 lacs for the injured.

Pakistan People’s Party (PPP) Chairman Bilawal Bhutto-Zardari also expressed a deep sense of sorrow over the sad demise of innocent lives and followed it up with a demanded of an inquiry against Ahmed over increasing train accidents.

“Prime Minister Imran Khan, who always gives examples of resignations, should sack Sheikh Rasheed over his negligence towards his ministry,” he said.

“The ineptitude [and] misplaced priorities not only spell disaster but death for Pakistanis. No one is concerned. No one is bothered. Callousness is shocking,” she wrote.

Earlier on June 20, at least three passengers were killed and multiple were injured after a freight train collided with a passenger train near Hyderabad.

On September 5, 2018, an explosion rocked a railway track in Sindh’s district Nausheroferoze. Rasheed had said that the up-track was slightly damaged and the operations on the affected railway lines have been suspended, however, both the trains remained safe, and were sent to their desired destinations.

It is pertinent to mention here that this is the 18th accident that has occurred during Rasheed’s tenure.