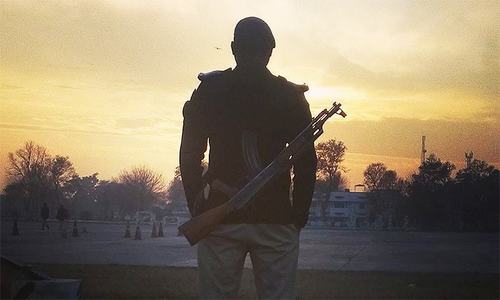 For last few days, Punjab Police, a force that has sacrificed over 1400 lives in protection of life and liberty of has been facing severe criticism in wake of few unpleasant incidents that hit hard peoples mind after going viral on social media.
The criticism is so wavered that it not only brushed aside the department’s outstanding services but lacked acumen and also ignored few, though harsh ground realities.
Often heard jack of all trades is the hallmark of nation seemed true in the current scenario. The critic varied from layman, laborer to university professor all demanding with one voice, “Police Reforms”.
A spotless face is the answer when asked for an alternative to begin considering our current socio-politico and cultural environment. This reminds the famous story of a painting hanged in bazar requesting public to point out mistakes and solutions.
Policing devoid of violence and torture in a society like ours is a wish shared by all of us including Police’s critics.
However, there are many missing links that need to be looked into for practical manifestation of this wishful thinking.
“Jesi Awam Wesay Hukmaran”, the famous proverb. In case of police it could be implied, “Jesi awam wesi police”.
The critics forget that police department was the reflection of the society itself. Its man power had not landed from skies but belonged to the society. Police officials once employed in the department become devoid of the cultural values and behaviours that they learnt in last 20-25 years before joining the department. There are automatically inherited and reinforced.
A cultural and behavioral aspect of our society is that it has internalized violence and torture. It (violence and torture) is deeply entrenched in our society.
In 1854, Madras Torture Commission, a commission set up by British Parliament to dig out facts behind the allegations of use of torture and violence for Revenue Collection and extraction of confession, had pointed out that the practice preceded the colonizers. It was part of their social, cultural life, the report had conceded.
We find the commission’s report still true after having a brief look around. Torture was a norm in our schools, madrassas, homes, streets, bazars, markets etc. Corporal punishment claimed a student’s life, wife succumbed to injuries inflicted by husband during a domestic dispute, a youth clubbed to death by friend are everyday stories of the society we are living. The critics forget the fact that they are live in a society where documenting mass lynching incidents may take weeks.
An additional Inspector General of Police defending the use of torturous means of investigations said what else once could expect for policing while living in a society where even jokes were incomplete without metaphors of violence.
Additional IG also laughed out after referring to a famous joke of a father of Pakistani origin settled in West. The father turned harsh to his son in the European country. The child informed police that took action against. The father thought to teach him a lesson and brought him back Pakistan. The moment they landed at airport, the father slapped the son who started crying and approached a police officer deputed at the airport.
The officer told the child he can do nothing in this regard as he himself went through the same treatment in the morning before joining duty.
Another cultural hangover the critics overlooked that no one honestly did his/her job until bribed or forced to do so. Teachers don’t do their job until someone (a supervisory officer) watches them over. They are more interested in tutions after school. Same is the case with doctors at hospital or take the example of any other department. However, the use of force for policing became unbearable.
They also overlooked in state apparatus and the political environment, police worked in Pakistan. Policing was highly dependent over criminal justice system that was skewed in favor of the accused. Police nabbed criminals after putting their lives in risk that were set free easily by the courts. Such hangovers compelled police officers to overlook legal bindings. Political influence in department’s working and criminals patronage is another challenge faced for policing in Pakistan.
Healthy criticism is important for societies to progress. However, it should not be skin-deep, superficial, biased and serve the interests of certain interest groups. Being critical does not mean that one should ignore the positive aspects.
Police is doing tremendous job despite severe hurdles as pointed out faced by it. They are the real unsung heroes. They were highly under-resourced and overburdened at the same time. Police force in the country was largely dependent on primitive means of policing varying from investigations to the operations. Set aside the proper buildings for police stations and offices, police lacked even basic facilities like stationery, furniture, drinking water and washroom etc.
Few historians, in a bid to expose the exploitative and inhumane practices of industrialists, describe during the times of industrial revolution, a father would see his son for the second time when he was adult. Such arbitrary were the duty hours of a worker.
Same is the case when it comes to policing in Pakistan. Policemen here do not have fixed duty hours.
It is unjust to ignore the circumstances that have given birth to a certain genesis of police department. It is a product of the society. Society is equally responsible. It cannot simply vindicate itself.
Related Topics:
Up Next

Oxford Of The East