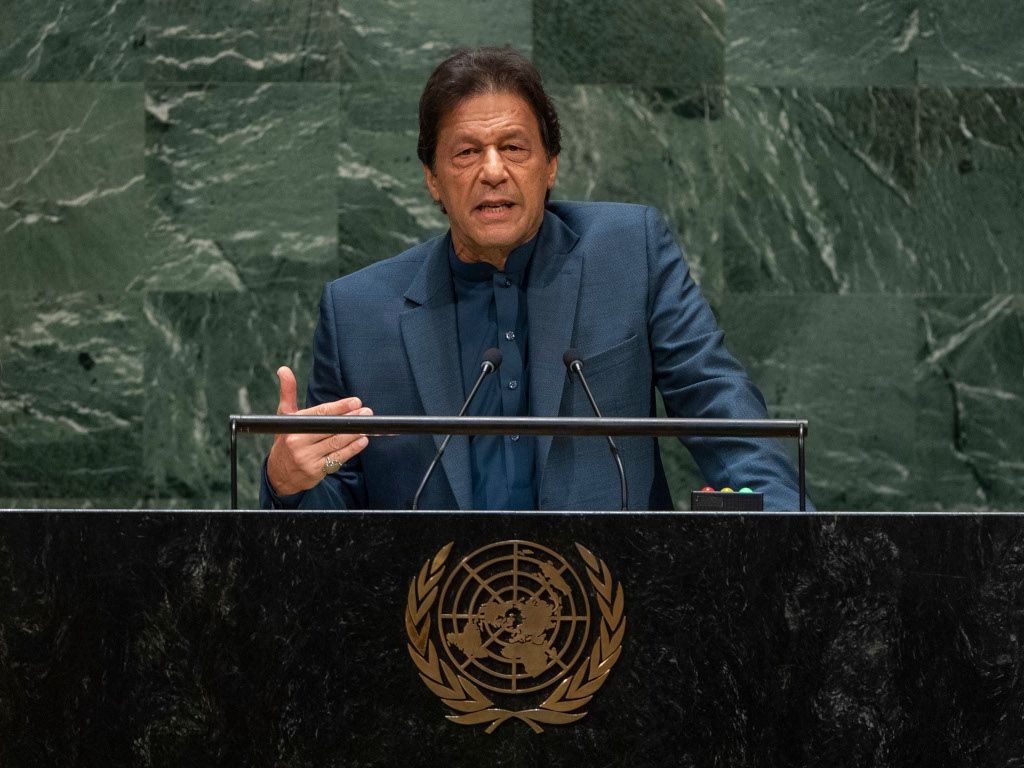 PM Imran Khan addressed in 74th session of United Nations general assembly on Friday. Undoubtedly, it was a commendable speech and has become a hallmark in the history of Pakistan. All Pakistanis felt honored for him to spoke such vibrantly and fearlessly to the world leaders. He mainly spoke the four points which were climate change, tax heavens/money laundering,Islamophobia and most importantly Kashmir issue. These issues really have major importance and need of the hour to address defacto.  Discussing shortly all his points, for climate change he expressed his view that this is not merely the increasing issue of any one country. Global warming has affecting the climate worstly. This is to deal with mutual efforts so that devastation could be controlled world widely.

Secondly he talked about the money laundering and tax heavens issues. He added that why the richer are making their hidden accounts in tax heavens societies and why these tax havens exist for. This should be stopped otherwise this will be how the rich become the richer and poor become the poorer. So this is alarming for us. We need the help of UN to counter these problems. Thirdly, PM khan very prudently address the issue of Islamophobia. He expressed that this wrong perception among the western countries has much proliferated after 9/11. Because they thought and misunderstood the 9/11 event was done by Muslims and they entitled the entire Muslim umah as terrorists and radicalized. He added there is nothing to do with terrorism in any religion. In all human communities, there are radicals, there are liberals, and there are moderates. no religion preaches radicalism. The basis of all religions is compassion and justice, which differentiate us from the animal kingdom.

PM Imran khan address for long 45 minutes in UNGA. In Indian media they are creating hype that why khan spoke for long 45 minutes even buzzer was ringing after 17 minutes which is maximum time for every speaker to address.  For fourth point for which Imran khan said that he is here today to address this issue to the world community. The Pakistani prime minister said he feared a “bloodbath” in Kashmir when the security lock-down in place since early last month is lifted. In his 45-minute address, Khan invoked and skeptic of a potential nuclear war between India and Pakistan over the disputed Himalayan region if the UN and the international community did not act soon. What is going to happen when the curfew is lifted will be a bloodbath.They will be out in the streets. And what will the [Indian] soldiers do? They will shoot them. Kashmiris will be further radicalized.

Khan said that I’m doubting a conventional war among both countries.But supposing a country seven times smaller than its neighbour is faced with a choice. Either you surrender or you fight for your freedom till death. We will fight and when a nuclear-armed country fights to the end it will have consequences far beyond the borders, it will have consequences for the world. Dozens of Srinagar residents came out in support of Khan after his UN speech, setting off firecrackers and raising slogans for independence and against Indian rule.

Vice versa to Pakistan’s PM Imran Khan Mr Modi did not spoke upon the Kashmir issue In his 17-minute speech. This evasion angered the residents of the region, who said it was unexpected from the Indian leader. When these leaders are in India, they say Kashmir is an internal matter. When they go to global forums, they say it is a bilateral issue. But they are continuously playing with the lives of people here, pushing millions to the wall. According the PM khan he told in his speech clearly that Mr Nerandar Modi is a life member of RSS who follows the fascist Nazi and Mussolini. They are in view that they are far superior than others and specially they do not have any mercy for the Muslims and Christianity even. And this have been proved by modi’s  illegal and insane invasion on Kashmir. Which might could not be succeeded anymore in near future.

Impact perceived by world:
Residents fear there will be an increase in armed rebellion in Kashmir if India and Pakistan do not resume their dialogue soon or the world community does not act there would be a havoc. Earlier a month the pm modi rejected the offer of mediation over Kashmir issue which was offered by US president Donald Trump. So question is this that which thing has made India to take such insane action just after Nerander modi’s hold office after electoral. He is no longer becoming on dialogue table nor is he let Kashmir to do plebiscites.  Other thing to be ponder upon that why the UNO and peace security councils and all human rights commissions and non-governmental organization were kept silent on the vicious brutality happening in Kashmir by Indian army and RSS troops. No any human rights organization felt the pain of innocent people of Kashmir who are being murdered and killed savagely. Who will control the savage and brutal terrorist India to stop tyranny in Kashmir?… if there is no… then Imran khan’s fear of conventional war will be far true. But if it happens so the devastation and havoc in results of war among two nuclear neighbor countries will be more than 1st and 2nd world war.  PM Imran khan has put this issue on international forum before the world leaders. Now lets see and hope what UNO do for this issue. And how this issue be dealt so far. And see if PM khan’s speech in UNO work out or not. Let’s the cat out bag.

Welcome to Punjab: The Birthplace of Guru Nanak

IS RADIO PAKISTAN THE VOICE OF THE NATION