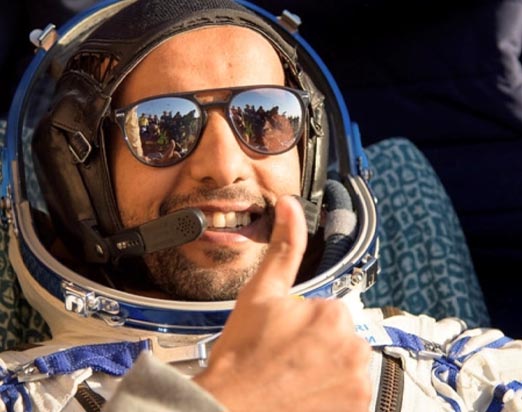 We are proud to welcome the UAE’s ambassador to space,  carries with him knowledge, experience, and the results of scientific experiments conducted aboard the ISS: Al Mansoori

The spacecraft undocked from the ISS, on 3rd October 2019, at 11:37 UAE time, and landed in the southeast of Dzhezkazgan in Karaganda Region, Kazakhstan at 14:59.

Al Mansoori was received by Salem Al Marri, head of the UAE Astronaut Programme, as well as Saeed Karmostaji, the Astronauts office manager at MBRSC, and a specialised international medical team. The astronauts were then taken to a health camp.

Cosmonaut Ovchinin and astronaut Al Mansoori were then transferred to Yuri Gagarin Cosmonaut Training Centre, GCTC, in Star City, Moscow, where Dr. Hanan Al Suwaidi, the flight surgeon for the mission, did a medical check on Hazza.

Hamad Al Mansoori said, “Today, we are proud to welcome the UAE’s ambassador to space, Hazza Al Mansoori, back to Earth. He carries with him knowledge, experience, and the results of scientific experiments conducted aboard the ISS. These experiments will enrich human knowledge, as well as the global scientific community, and pave the way for Arab youth to have new dreams and ambitions in this leading sector.”

“Today, we kick-start a new era in the UAE’s space sector, with the completion of a new success story for the country. Al Mansoori set off with ‘Zayed’s Ambition’, and raised the UAE’s flag high in space. He became a role model for Arab youth, and paved the way for generations to come,” added Al Mansoori.

Nuclear war between Pakistan and India