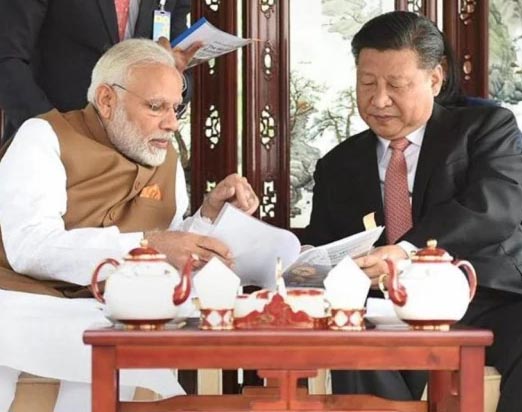 The talks coming at a time when ties have been strained over occupied Kashmir.

New Delhi: India’s Prime Minister Narendra Modi will host Chinese President Xi Jinping for an informal summit on 11-12 OCT., the Indian foreign ministry said
The talks coming at a time when ties have been strained over occupied Kashmir.

India had been preparing for the talks on Friday and Saturday but there had been speculation that they might be postponed because of differences over several issues.

These issues include Chinese anxiety over India´s move in August to split the state of Jammu and Kashmir partially claimed by China into two and Indian military exercises in Arunachal Pradesh , The Part which is also claimed by Beijing.

India has also objected to Beijing’s Belt and Road initiative, a global infrastructure programme that includes a major project through Azad Jammu Kashmir.

The meeting in Chennai on Oct 11-12 is aimed at enhancing the rapport formed by the two leaders when they met in the Chinese city of Wuhan last year to help stabilize ties after a standoff in another contested section of their long border, far removed from Kashmir.

But New Delhi’s decision in August to withdraw special status for occupied Kashmir drew sharp condemnation from Pakistan and its ally China, which took the matter to the United Nations Security Council.

“The forthcoming Chennai Informal Summit will provide an opportunity for the two leaders to continue their discussions on overarching issues of bilateral, regional and global importance and to exchange views on deepening India-China Closer Development Partnership,” According to Indian Forign Ministry

India insists its revocation of the special status of Muslim-majority occupied Kashmir is an internal matter and aimed at faster economic development of the Himalayan territory. China said it believed India and Pakistan must refrain from taking unilateral action in Kashmir and has expressed concern over human rights violations in the territory. India has dismissed those concerns.

ISTANBUL: Turkey has launched a military operation in Syria.