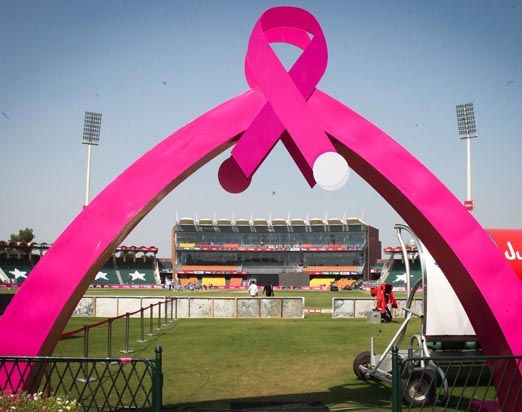 We are in complete contact with all relevant agencies regarding security arrangements. DIG Operations Lahore

The third Twenty20 match between Pakistan and Sri Lanka will be painted in pink on Wednesday at the historic Gaddafi Stadium.

President Arif Alawi and Chairman Pakistan Cricket Board (PCB) Ehsan Mani will attend the ping-day ceremony before the match.

On this occasion, the President of Pakistan will wear a pink ribbon to the captains of both teams. All the players and officials involved in the match will be wearing punk ribbons, while in the stadium, there will be distribution of punk ribbons among the 12,000 fans.

The Pakistan Cricket Board has decided to name this match for breast cancer awareness.

In Australia and South Africa, the ‘Punk Day’ cricket match is celebrated and now the tradition is being established in Pakistan.Punk shirts will also be distributed among 750 cricket fans at Gaddafi Stadium.

Over 13,000 police officers and personnel will be on duty during the final match.

Cricket teams and fans will follow up with the SOPs of the last Two matches for cricket’s foolproof security. DIG Operations Lahore

Restoration of international cricket in Pakistan is a great cause for Lahore police.We are in complete contact with all relevant agencies regarding security arrangements. DIG Operations Lahore