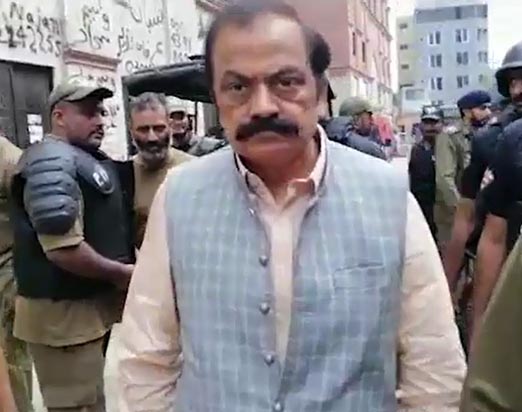 Footage had been saved and our concern was over, all the story of bagging and exporting drugs was false: Rana’s Lawyer

A drug trafficking case was heard against the PML-N leader Rana Sanaullah in Lahore’s anti-drug court, in which ANF officials presented the leader to the court.

During the hearing, Rana Sana’s lawyer, Prime Minister Nazir Tarad, argued that the footage had been saved and our concern was over, all the story of bagging and exporting drugs was false, Root supports our first stand, watch the video. After Rana Sanaullah’s position has come true.

Rana Sana’s lawyer, Farhad Ali Shah, argued that if there are no courts in this country, they should eat people raw.

The ANF prosecutor said that under what law the proceedings are underway, if the duty judge can hear the trial, then the accused should be charged, they say, with him. The abuse is happening, this case is being hijacked.

Talking to the media after the hearing, Rana Sanaullah said that PML-N workers should follow the party leadership regarding the independence march. Do your best.

He said that the safe city record justified my position, Shahriar Afridi should apologize to the people, the record proved that no action was taken on the toll plaza. its Granted, I’ve never seen heroin in my life or smoked cigarettes.