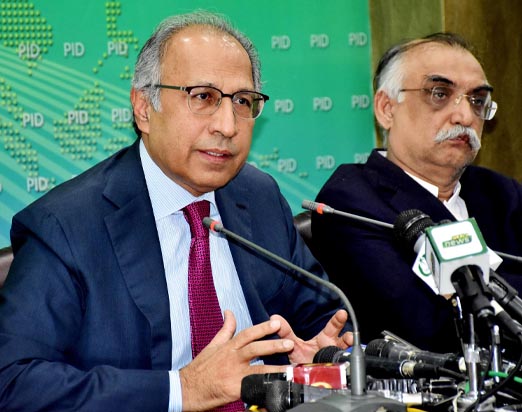 Trade deficit was brought down by 35 per, Revenue had also increased by 16pc, Adviser of PM on Finance

Islamabad: Dr Abdul Hafeez Sheikh Adviser to the Prime Minister on Finance reviewed the economic performance of the country during the first three months of the financial year 2020.

Two big deficits, foreign trade and fiscal. had been brought under control in the country, Addressing a press conference in Islamabad

Finance Minister said that the trade deficit was brought down by 35 per cent while fiscal deficit was reduced by 36pc in the first quarter.”These are big steps and their positive results have come forward, he noted that revenue had also increased by 16pc,” Sheikh said.

Non-tax revenue is the One thing that we have really improved in comparison to the previous year, the finance adviser said.

Rs406 billion had been collected in non-tax revenue which was a 140pc increase over the previous year. “We think that this is a big achievement. In our budget, we have a Rs1,200 billion target, but I want to share the good news with you that we will increase this by Rs400bn and are confident to take it to Rs1,600bn.”