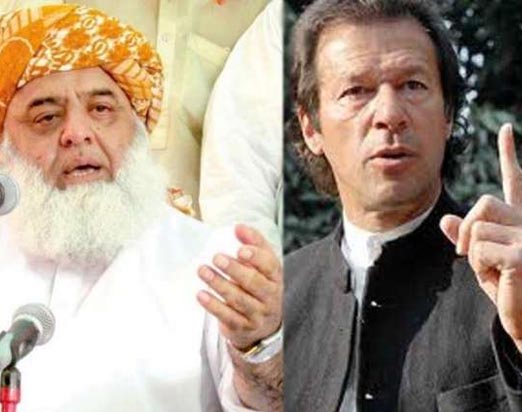 Khan gives instructions, in case protesters turned unruly they would be dealt with sternly.

ISLAMABAD: Prime Minister Imran Khan asked his political abets to open ” dialogue channel” with Jamiat Ulema-i-Islam (JUI-F) chief Maulana Fazlur Rehman who has given a call for a sit-in against the government on Oct 31 in the federal capital.

PM Khan gave these instructions during a meeting with government’s spokespersons at the Prime Minister Office (PMO).

A proposal was floated that the government must reach out to the JUI-F chief to ascertain demands of his party and it should not go for a deadlock on the issue.

It was also decided, who will kick off his agitation programme known as Azadi March from Sindh on Oct 27 and will reach Islamabad on Oct 31,
would not be stopped from staging the sit-in in the federal capital, but in case protesters turned unruly they would be dealt with sternly.