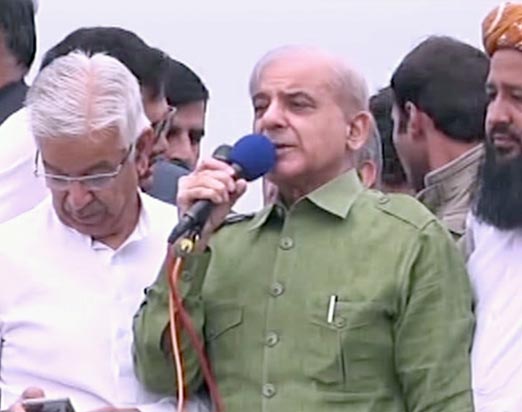 Islamabad: PML-N President Shehbaz Sharif, while addressing the prime minister, reminded him that it was he, in his “pride and arrogance” who had refused to collaborate with the opposition on a charter of economy.

“You started this container politics, you said you will burn down the Parliament, you said something about me. I will not respond to you in your language,” said Shahbaz sharif

Despite such blatant rigging, for the benefit of the nation, we said we are ready for a charter of economy. PML-N President Shehbaz Sharif says that if the opposition parties had even 10 per cent of the kind of support Prime Minister Imran Khan “enjoys from institutions”, we would have seen Pakistan soar like a Sputnik rocket.

PML-N president Shehbaz Sharif while addressing the Azadi March jalsa has said, the time has come to get rid of this fake government. The “politics of containers” allegedly introduced by Prime Minister Imran Khan is being buried today by the opposition.

He said the sea of people gathered at the protest site will wash away the selected prime minister.