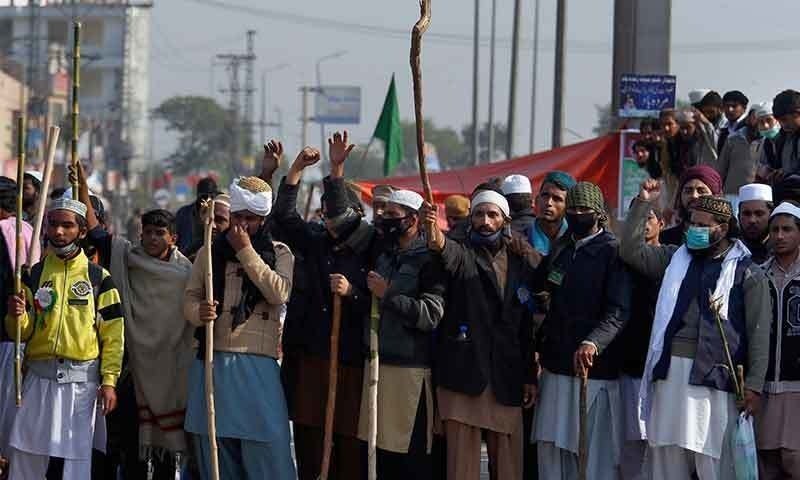 And eventually we were told that after three days of complete anarchy, the government of Pakistan had signed a deal with Tehreek-e-Labbaik Pakistan (TLP). This was a hurried solution to end the catastrophe launched by TLP protestors in the wake of the Aasia Bibi verdict that came on the 31st of Nov. Nationwide protests had erupted against the acquittal of blasphemy accused Aasia Masih, aka Aasia Bibi, by the Supreme Court of Pakistan.

As had been seen throughout the history of Pakistan, this defensive track of diplomacy adapted by the sitting government has again ignored all evil propagandas of a religious extremist party and has accepted their place not as a stakeholder only but also as a political entity. This move comes after 3- 4 days of complete shutdown of the whole country by TLP followers who not only did economically choke down the whole country but also left lasting physical damages. This includes a loss of approx. (Rs 150 billion) to the country and also uncountable burnt automobiles and destroyed properties.

Plus, the most important factor that cannot be ignored during this episode was terming the head of institutions of Pakistan i.e., Chief Justice, Army Chief and Prime Minister as Wajibul-Qatal by the TLP leaders. The honorable judiciary was also not left out of this heinous attempt and it has the capability to shake the working foundations of the whole country. Not only does this put valuable position holders of institutions in a vulnerable position but it also questions the integrity of Pakistan as a sovereign state.

The hate speeches of TLP leadership cross all thresholds of national interest of Pakistan. No hard action against such an aggravated verbal and physical assault depicts Pakistan as nothing less than a banana republic. Even if PTI leadership had to control the situation initially and then address the complaints later, they should have adopted a better plan. To sit back and accept the demands of the religious bigotries puts Pakistan back at the path where the state is not sure about the working boundaries. More than 70 years since independence and we still are unsure if whether we want to be a religious state or a liberal secular one.

As far as the issue of Asia Bibi committing blasphemy or not is concerned, masses should have accepted the decision of the highest court in Pakistan. They should have been happy that no blasphemy could be proved. It was a win-win situation for everyone. But no, TLP leadership could not have left it at that. Hence, they politicized the whole matter again as they have been doing so for a while. Their vote bank would definitely gotten a lift, even if by a meagre margin. The government again was made to look like a fool.

Besides all this, there is another debate that needs to be surfaced as well. It is about whether there should even be a blasphemy law in a country whose majority of the population is Muslims, 97% to be more precise. The question then comes to mind as to why this law should not be rooted out completely when every Muslim is a guardian and lover of the Prophet himself. Why leave the lives of minorities in the hands of others when they are guaranteed religious freedom and preached tolerance? This law in the 21st century seems like a logical fallacy. If not so, proper amendments should be made for practicing this law. It is a very sensitive issue considering the extremist religious mind-set of a faction in our society and it needs to be dealt with care so that no such issue haunts us in the future.

As far as the current situation is concerned, PTI leadership could have set a more assertive example. It was the first hiccup in their tenure and hence a more impressionable policy could have saved them towards a lot of trouble. For now, extremist parties have got their heads high and will strike on their will. They would have known by now that simply by choking the whole country through the use of a mob, they can make the government bow down. Even after unprecedented damages to life, property and economy, they seem to have gotten away very easily.

Lodged FIRs and crackdown of almost everyone involved in the violent protests seems like a good place to start for the government to reciprocate their futile agreements with TLP. They should be legally charged and trialed so that the message can be spread across loud and clear that the writ of state is final and ultimate. Also, it would not be impractical if the security of the threatened heads of institutions is revised. After all, it was this very Asia Bibi case, and another so called ‘Ashiq e Rasool’ and a personal security guard that had assassinated former governor Punjab ‘Salman Taseer’ after he too was termed Wajibul-Qatal by religious extremists.