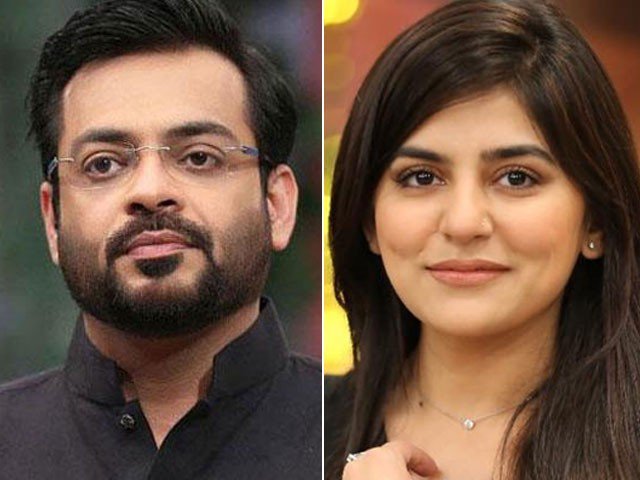 Aamir Liaquat’s second marriage has been talk of the town since the couple shared pictures of the rukhsati last month.

Aamir Liaquat, a TV personality and lawmaker of the ruling PTI, was criticised for not taking care of his first family. However, Liaquat  shared a video on Twitter in which he responded to trolls. Since then, he and his second wife, Tuba, have been making appearances on TV shows.

The couple was recently invited to Sanam Baloch’s show on a private TV channel and some of the comments they made have put the social media on fire.

While Baloch and Liaquat engaged in a banter (not to mention the awkward flirtations) in the first half of the show, things took a turn for the worse during the last five minutes. The Daastan star asked Liaquat about why his first wife didn’t accept the second marriage.

“You are a Islamic scholar. You’ve studied religion,” she addressed her question to the TV personality. “Your kids have been brought up by you in the similar environment. Bushra bhabhi (his first wife), with the way she looks and talks seems to have studied Islam as well. It’s not like you have committed a sin by marrying for a second time. Why hasn’t she accepted your marriage?”

And Liaquat’s response was definitely uncalled for.

“You answered your own question. She didn’t study Islam,” he asserted. Studying religion and studying it for a degree are two entirely different things.”

Baloch then referred to a tweet by Liaquat’s daughter regarding Tuba, which she found heart-breaking.

“I can recall more than one incident where kids said something that would hurt you even more. But they are kids after all. I don’t pay much heed to it,” he responded.

Baloch further probed him about why the kids would want to malign his new marriage or character.

“Children’s twitter accounts don’t appear out of the blue,” said Liaquat with an accusatory look on his face, implying that his first wife might have been encouraging the kids to do so.

“I got your point,” responded Baloch with a reaffirming gesture.

Soon after the show, social media users called out Baloch and Liaquat for ‘degrading’ his first family.

“Sanam Baloch invited Amir Liaqat on her morning show and literally advocated for second marriage and asked why didn’t the first wife accept it. Shame on you! You are perpetuating sexism and misogyny in our society,” one user wrote.

“And Sanam Baloch endorsing him and passing judgement about his family. Aamir Liaquat ridiculing them it’s so disgusting. Can’t imagine how painful and humiliating it must be for his family,” another one said.

“Like why is Amir Liaqat being invited to morning shows in the first place? And why is he even discussing his first wife and kids?!??? How idiotic is this Faysal Qureshi and Sanam Baloch can you not find better and more deserving guests?” one user commented.

“Used to like Sanam Baloch but just lost respect for her after watching this clip. Why would you have this vile polygamous creature on your show and then be applauding him so,” said another one.

“Watched Aamir Liaquat on Sanam Baloch’s morning show just to remind myself how much I hate Pakistani dramas/morning shows etc. So cringeworthy,” wrote a user.

‘The Legend of Maula Jatt’ to release in Pakistan, China together