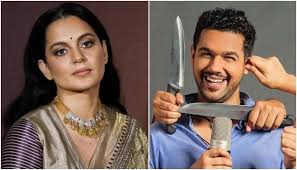 Karachi: Pakistani writer and comedian Ali Gul Pir has taken a dig at Bollywood star Kangana Ranaut in their hilarious exchange on Twitter. The rapper responded to one of Kangana’s many charged tweets against the international support that the protesting farmers in India have been receiving since Rihanna highlighted the cause. The Queen actor, 33, reacted to a video of Canada’s New Democratic Party leader Jagmeet Singh revealing his connection to the Grammy Award-winning singer on her platform.

Unable to detect the tongue-in-cheek nature of Gul Pir’s comment, the Manikarnika star replied: “Someone who can’t sell music without making it sensual/adult. Unlike classical and genuine singers where body is of no consequence. A porn singer is hugely dependent on his/her flesh show off, private parts exposure and mediocre talent. This makes them absolutely massy, and junk.” The Pakistani comedian, however, wasn’t nearly done roasting Kangana as he tweeted back, saying: “Oh okay! I understand. Like someone who doesn’t have talent, hasn’t done much work and relies on controversy and putting people down to stay in the news. Thanks for clearing it out for me.“