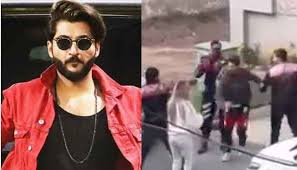 Karachi: Bilal Saeed took to twitter to address his viral video in which he is seen fighting with her brother and an unidentified woman.

Bilal Saeed became top Twitter trend in Pakistan as thousands of users reacted to his video.

He added, “When the safety and dignity of a person is violated and jeopardized over and over again, he unfortunately is left with no option but to react.”