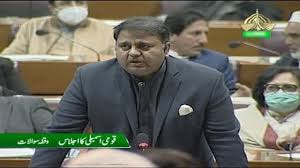 ISLAMABAD: Prime Minister Imran Khan is the only leader who wants to bring more transparency to the voting system, said Federal Science Minister Fawad Chaudhry while taking the floor of Parliament on Thursday.

The National Assembly was discussing the bill tabled by the PTI on holding Senate elections through an open ballot. The members of the opposition have opposed the bill. He claimed that Nawaz Sharif and Asif Ali Zardari have mastered the act of purchasing votes. “They want to keep the Senate a millionaires’ club.”

Chaudhry said that Sadiq Sanjwani had promised to take action against senators who sold their votes. “Nothing was, however, done.”

He gave a brief history of the secrecy of the vote and even quoted the judgement of the Supreme Court of India in a case on secret ballots. The court said “if secrecy becomes a source of corruption, then sunlight and transparency have the capacity to remove it”, he added. The federal minister said that the members of the opposition cannot stand up against money. “They have become the pioneers of lota-cracy.” Their entire leadership has been compromised.

He even criticized the PPP leaders, such as Shazia Marri and Bilawal Bhutto Zardari, for going against the vision of Benazir Bhutto. “Clause 23 of the Charter of Democracy, signed by Benazir, says that Senate elections should be transparent. Have you forgotten what your leader wanted?”

Senate elections are held every three years and only the commission has the authority to organize them. The process is, however, spread over phases and takes roughly a month to conclude.