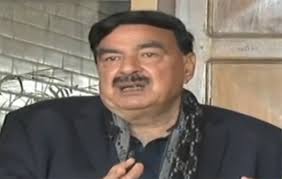 ISLAMABAD: Minister for Interior Sheikh Rashid Ahmed Wednesday said the government after negotiations with the protesting employees was ready to notify an increase in the wages of grade 1-16 employees.

Addressing a joint press conference flanked by Minister for Defence Pervez Khattak and Minister of State for Parliamentary Affair Ali Muhammad Khan, he said the protesting employees were primarily demanding increase in the salaries from grade 1 to 16 where 25 percent increase to their basic salaries was possible at the moment and would be notified by the cabinet on  Tuesday after the protesters’ agreement.

Sheikh said that political parties were vindicating the protest for their personal gains which should not be exploited.  “Service rules are applicable on government employees and not political leaders. Therefore, the public servants should raise voice for their own rights instead of becoming tools at the hands of political parties.”

He added that negotiations by the government’s team were underway. The minister also thanked PIMS protesters for calling off their protest on his request.

Speaking on the occasion, Minister for Defence Pervez Khattak said the protesters yesterday had made a new demand for raising salaries till grade 22 employees of the federal government which was not possible at the moment keeping in view the country’s economic condition.

He said: “We have requested the protesters to wait for the Pay and Pension Commission’s Report as the government itself wants to give this increment to them.”

Khattak mentioned that the second issue appeared was the provincial governments’ employees were also participating in the protests.

“They are requested that after 18th amendment its provincial government’s mandate to accommodate them and they are responsible to resolve their issues,” he added.

Minister of State for Parliamentary Affairs Ali Muhammad Khan said protesters were responsible people, employees of the state and our brothers and the government engaged them for resolution of their issues.

The government was concerned about the issues of employees, he said adding when for the first time the employees held a protest, he and Deputy Speaker National Assembly Qasim Khan Suri met them and brought the issue to the notice of the Prime Minister.

The negotiations were held with the employees in numerous meetings and the government representatives also met with the Pay and Pensions Committee and the Finance Minister, he told. The minister said many of the issues were already resolved including upgradations and mergers.

He said hopefully remaining issues would also be resolved before and at the time of the budget presentation.

“Despite limitations and difficulties of the government, the issues of employees would be settled,” he assured.

Terrorism spread in Pakistan due to weak education system