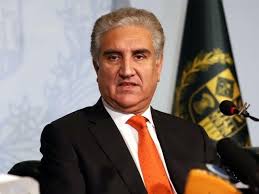 ISLAMABAD: Foreign Minister Shah Mahmood Qureshi on Tuesday terming Supreme Court the most appropriate forum for interpretation of Constitution said the government would respect its guidance on the matter of open ballot in Senate election.

The Foreign Minister said the government had only two options, either to approach court for a constitutional interpretation or to amend the Constitution, for which it lacked the two-third majority.

Commenting on the current political situation in the country, Qureshi said Pakistan Peoples Party and Pakistan Muslim League-N always bluffed about democracy and demanded open voting, but now were deviating from their claims.

“The Opposition still wants to protect continuity of corrupt practices. The interests of the Pakistan Democratic Movement (PDM) differ with their politics,” he said.

He mentioned that the government invited the opposition for talks and gave them a chance in accordance with the Charter of Democracy(CoD).

The Foreign Minister said Director General Inter Services Public Relations (ISPR) had made it clear that army should not be dragged into politics and also stressed that the institution was fulfilling its constitutional and legal responsibilities.

He mentioned that army was fighting terrorists at the western border, countering miscreants in Balochistan and facing daily ceasefire violations on eastern front besides assisting the government in handling coronavirus challenge.

He said some elements affiliated with the PDM were supporting the enemy’s rhetoric by unnecessarily criticizing the institutions.

On a recent United Nations’ Monitoring Report, he said, Pakistan’s stance had been validated at international level.

The Foreign Minister said Pakistan was playing its role in highlighting the atrocities faced by Kashmiris under continuous siege for last 18 months.

He said the sacrifices of Kashmiri freedom fighters including Afzal Guru would not go in vain and the Kashmiris would get their right to self-determination.

On the missing mountaineers of K-2 expedition, he said the government and army were making every effort to search for the climbers.

He mentioned that he spoke to the Foreign Minister of Iceland and updated informed him of the search operation.

Qureshi expressed dismay over the rampage by lawyers at Islamabad High Court yesterday, saying the situation would put a negative mark on the prestige of the Bar.

“Lawyers must have taken the legal course to express their views. Now, senior lawyers should come forward to ease the tension,” he said.