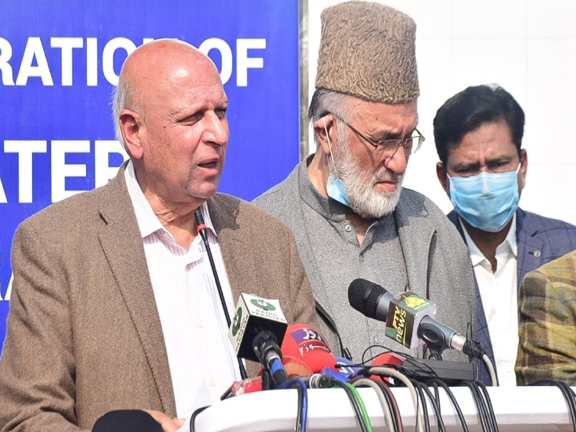 LAHORE: Punjab Governor, Chaudhry Mohammad Sarwar, has said that the Pakistan Tehreek-e-Insaf (PTI) government wants to stop horse-trading in the upcoming Senate elections, but the opposition wants its continuation. He said, the opposition should support the government in the legislation to curb the menace of horse trading. He said this while addressing the inauguration ceremony of Water Filtration Plant by Al-Khidmat Foundation at Jinnah Hospital Lahore on Sunday. Vice-President Al-Khidmat Foundation Syed Ehsan Ullah Waqas, Vice-Chancellor of University of Health Sciences Lahore Prof. Dr Javed Akram, MS Jinnah Hospital Lahore Dr Yahya Sultan and Syed Rashid Dawood among others were present on the occasion.

Responding to a question, Chaudhry Sarwar said that Pervez Khattak’s statement has been quoted out of context; whatever Pervez Khattak said, he also made it clear that he stands with Prime Minister Imran Khan. He said that no one can overthrow the government, and elections will be held in 2023. He said that as far as the matter of open ballot in the Senate is concerned, the opposition used to demand transparency in the Senate elections and now when we are legislating for it, why is the opposition not supporting us?

Governor Punjab said that when he was elected as Senator from Punjab, people also questioned him regarding votes, adding he said that the members of Assembly voted for him because of his public service and good relations with members of Parliament. He said that former governments spent billions of rupees on clean drinking water projects, but their filtration plants are lying non-functional now. Punjab Aab-e-Pak Authority will create such a network that filtration plants installed by the incumbent government will continue to function in coming years, he added. Ch. Sarwar further said that ever since he assumed office as Governor Punjab, no fundraising has been done for Sarwar Foundation at Governor’s House and will not be done in future as well.