KARACHI, : An impressive change of guards ceremony was held at
the mausoleum of Quaid-e-Azam Muhammad Ali Jinnah to commemorate his 145th
birthday on Saturday morning. 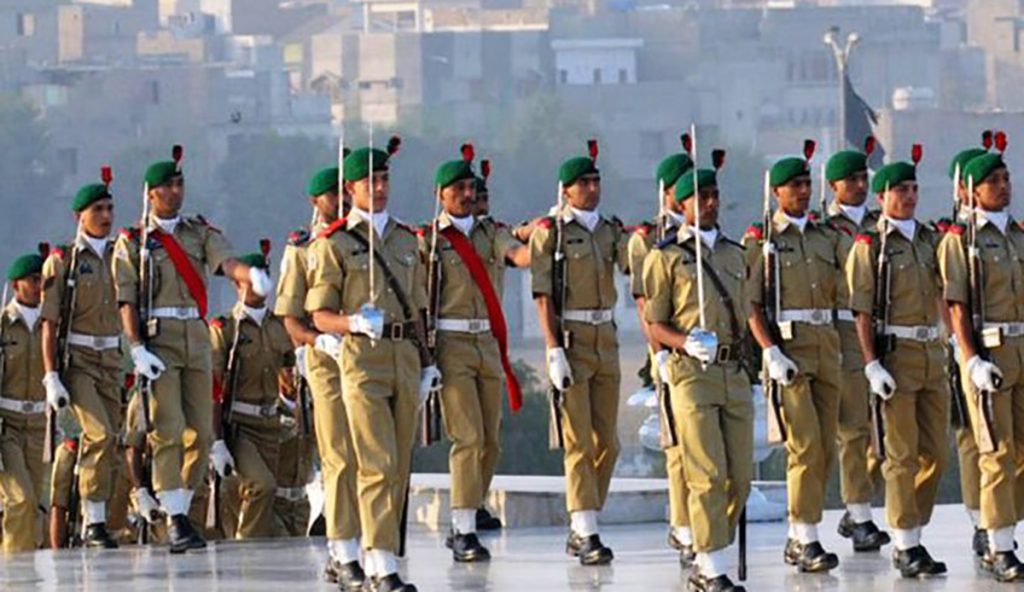 A smartly turned-out cadets of the Pakistan Military Academy assumed guards’
duties from Pakistan Air Force (PAF) at the mausoleum.

Chief guest Commandant Pakistan Military Academy (PMA) Major-General Umar
Ahmad Bukhari inspected the parade and paid homage to the Quaid. He also
laid a floral wreath at the Mazar and offered fateha khawani. He also
recorded his expression in the visitors’ book.

Pakistan Military Academy Kakul is only institution of the armed forces
which as an academy was termed “Quaid’s Own Battalion” by “Colonel Chief”
Quaid-i-Azam.

In a message on the occasion of birth anniversary of Quaid-i-Azam on
December 25, Imran Khan said, “On this day, I want to emphasize upon our
youth that Jinnah’s attributes of honesty, hard work, perseverance and
dedication to a bigger cause made him the great leader.”

“We as a nation need to adopt these attributes to realize Quaid’s vision of
a developed, progressive and tolerant Pakistan.”

He said, “Today we celebrate the birthday of our great leader Quaid-i-Azam
Muhammad Ali Jinnah.”

It was a matter of privilege for our generation and our children to born in
an independent Pakistan that could not have been our destiny without the
struggle of Quaid-i-Azam, he added.

He said Muhammad Ali Jinnah realized the importance of a separate homeland
for Muslims of the subcontinent where all citizens could enjoy freedom of
faith, occupation and equal opportunities.

Quaid’s determination to unify a nation despite huge challenges and
opposition was only possible due to his perseverance, he added.

He had a firm faith in Almighty Allah and followed the principles of Prophet
Muhammad (PBUH) that guided him through difficulties and challenges, the PM
said.

“As per Quaid’s vision, our government is striving for a society free of
corruption and a system that helps the poor and underprivileged citizens.

Pakistan is facing both internal and external challenges and the only
solution to overcome these is to live by the Quaid’s ideals of unity, faith
and discipline,” he added.

He said it was a day to join together in the same spirit as our forefathers
did during the independence movement. “Let us shun our differences based on
cast, creed and faith and work in unison.”

He said, “I pray Almighty Allah to grant us strength and unity to realize
our destiny of becoming the strongest nation on earth as envisioned by our
Quaid-i-Azam Muhammad Ali Jinnah.”

In a tweet uploaded on Saturday morning, DG ISPR said “Quaid’s vision of a
peaceful & progressive Pakistan following principles of Unity, Faith &
Discipline is imperative for our success as a nation.”

Related Topics:Impressive change of guards ceremony
Up Next