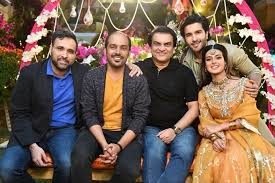 The actor then thanked the producers Kadwani and Qureshi for their efforts, before going on to praise the director. “Wajahat Hussain, you [are the] Sanjay Leela Bhansali of Pakistan,” wrote the Aziz. “The best part about you as a director is that you’re fantastic at creating moments. You know what you want and you know how to make it happen.” The comparison may have been farfetched, but it’s sweet nonetheless. Writing about her Khan, Aziz said: “Feroze, it was a delight to work with you and I hope and wish this project creates a benchmark for all projects in the future.”

The actor also reminisced fun moments from the set of the serial, “And who all are not in this picture, I’m so happy to work with you all and would never forget all the off-screen moments, jokes, late-night Bahawalpur ki sardi aur Multan ki tapti garmi wali shoots, and whatnot.”

Aside from Aziz and Khan, the cast of Khuda aur Mohabbat 3 includes Zain Baig, Sunita Marshall, Junaid Khan, Tooba Siddiqui, Momina Iqbal, Asma Abbas, Usman Peerzada, Rubina Ashraf, Javed Sheikh, Hina Khawaja, Meher Bano, Sohail Sameer and Noor-ul-Hassan. The drama has been written by Hashim Nadeem. While no release date for Khuda aur Mohabbat 3 has been announced, it is being speculated that the show will go on air in three weeks. The OST of the serial, however, was recently released and became an instant hit.