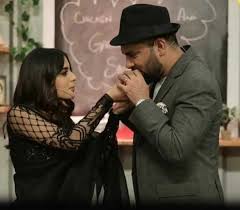 Karachi: Iqra Aziz and Yasir Hussain stay in the news often – but for varying reasons. While Aziz is known for making noise through her work, Hussain makes headlines for his opinions.

Recently, the couple appeared on Time Out With Ahsan Khan, whereby they talked about their romance, the latter’s troublesome statements and the industry chatter.

“Yasir has a totally different personality,” Khan said as the duo seated. “Maybe Iqra has a sense of humour at home.” To this, Hussain responded, “The good thing about Iqra is that she doesn’t mind my jokes, unlike the rest of the nation.” Aziz chuckled, revealing that most of her husband’s jokes revolve around her.

The couple tied the knot in an intimate ceremony in December 2019 after Hussain proposed to his now-wife at the Lux Style Awards. Talking about how their romance began, the Jhooti star recalled it was ironically an award show where the pair connected for the first time.

“I lost my phone at an award show,” Aziz shared, adding, “I knew Yasir already. While I was frantically searching for my phone, he came to the rescue while hosting the show. So, that’s how we started talking.”

“Did he ask for your numbers then?” Khan quipped. “Not at all,” Aziz confirmed. “That was another thing that impressed me. He never tried to converse more than necessary or asked for my number.”
Divulging more into the matter, Hussain shared how he was in the company of model Saheefa Jabbar Khattak and actor Hira

Mani when he was getting to know Aziz. “I was about to leave after my hosting stint. So, I was dropping the women off. Maybe that’s when they realised that I am a decent guy,” the Lahore Se Aagay star claimed. “After that, hangouts became a norm. But by that time I figured that I really don’t have time to waste. I am 11 years older than her, I immediately proposed.”

Khan went on to talk about the age gap. “In my family, I know few couples with an age gap of ten years or so, and it works well for them,” the Bandhay Ek Dor Se star continued. “But it is unusual in our industry. Usually, we are peers of the same batch, of the same ages. How well does the age difference work for you in your relationship?”

“I think it [the age gap] is very important,” Aziz responded. “Since he is older than me, he knows life, and the industry better. I take advice from him more than often.”

Sharing what really attracted the Ranjha Ranjha Kardi star to her husband, Aziz confessed, “His empathic nature. He really wants to keep everyone around him and I, happy. He loves to solve others’ issues.”