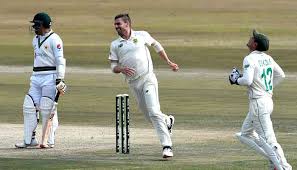 RAWALPINDI: Heavy rain delayed the resumption of the post-tea session on the opening day of the second Test match between Pakistan and South Africa on Thursday. Babar Azam and Fawad Alam brought Pakistan out of the woods with a 100 runs plus partnership, after the green shirts lost three quick wickets.  As players walked off the field at the tea break, it began to pour, with rain lashing the Rawalpindi stadium as grounds men placed the covers on the pitch and adjoining area. Play was due to resume at 3:00 PM local time (1000 GMT) but persistent rain kept players in the dressing rooms. Pakistan, who won the toss and batted, were 145-3 at the tea break with skipper Babar Azam on 77 not out and Fawad Alam unbeaten on 42.

Pakistan leads the two-match series 1-0 after winning the first Test in Karachi by seven wickets. Pakistan were struggling at 63-3 at lunch on the first day of Rawalpindi Test after South Africa left-arm spinner Keshav Maharaj took two wickets in successive overs on Thursday. At the break, skipper Babar Azam was unbeaten on 24 with Fawad Alam on 16 not out on a flat, brownish Rawalpindi Cricket Stadium pitch. Pakistan, who won the toss and batted, reached 21 without loss before throwing away three wickets for one run in the space of 23 balls. Maharaj, brought into the attack in just the ninth over, had opener Imran Butt caught behind for 15 and then trapped senior batsman Azhar Ali leg-before for nought in his next over. Paceman Anrich Nortje then produced a sharp rising delivery to Abid Ali (six) whose fended push was caught smartly at short-leg by Aiden Markram.

Azam looked in better touch after managing just seven and 30 in the first Test, having so far hit four boundaries. Alam, who scored a fighting hundred in Karachi, was sedate and cautious with two boundaries so far. Pakistan lead the two-match series 1-0 after winning the first Test in Karachi by seven wickets.