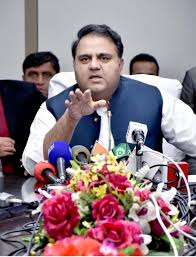 ISLAMABAD: Federal minister for Science and Technology Fawad Chaudhry said on Thursday that Prime Minister  Imran Khan  has approved the  proposal of country’s first drone authority in an effort to boost local drones manufacturing industry and to modernize agriculture sector for the progress and prosperity of the country.

Talking to a Private news channel, he said PTI-led government has been introducing drone technology which would be used for research in various sectors including , logistics, agriculture and for other peaceful purposes in diverse areas in the country. Fawad said that  in the beginning, the drones were used for defense purposes only but now they were a very important monitoring tool for police activities  and agriculture sector. He said that two companies have already start preparing drones in the country, adding, drone technology was now being used in Agriculture where sowing of seeds and fertilizer were done by using drones.

Pakistan’ s agriculture sector was  being progressively transformed into a high-tech industry through digital services and drone technologies, he said, adding, Drone technology within next three years would be made easy and accessible for everyone in the country. He further explained that in drones software technology country was self sufficient but in hardware technology “we are little bit far from it where we need to focused more”.

He also announced that government would soon come up with a policy aimed at promoting 3D printing on an industrial scale and helping domestic companies overcome technical and economic barriers so that they can build supportive and ancillary facilities for world leaders in the technology. Federal minister also said the government intended to turn the country into a ‘technological power’ and under the ‘Made in Pakistan’ vision local made ventilators and other medical equipments were manufacturing locally. He said that within the current year country would also start local manufacturing for Dialysis and X ray machines and its credit goes to PTI-led government that now Pakistan is in race with India other developing countries for manufacturing its own products in country. Replying a Question related to EV-policy, he said Electric vehicles could be a better alternative to fuel-based automobiles to mitigate air pollution and government has targeted to switch to e-vehicles in next five years to make Pakistan a 100-percent electric-vehicle nation. He also said that the government has further removed additional customs duty (ACD) and accounting services and tax on EV imports as governments throughout the world were trying to make this technology affordable through different financial and fiscal incentives including disbursement of direct financial subsidy.

Fawad advised youths to use technology and acquire knowledge and life skills to solve problems and be leaders. He said youths must know how to work as groups and use digital tools.

The forever hero Adnan Siddiqui, says: I’m a vampire when it comes to actors of certain age playing heroes