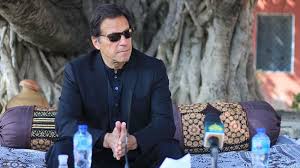 RAWALPINDI: Prime Minister Imran Khan has assured to fully support and provide social protection to the poor segments of the society.

Prime Minister Imran Khan on Wednesday said that the opposition parties will cry foul if upcoming elections of the Senate are not held through open vote as government can secure more seats throughsecret voting.

Talking to media persons at Kallar Syedan Tehsil of Rawalpindi, Prime Minister said that rate of one seat of upper house ofParliament is between Rs500 million to Rs700 million and wondered how these representatives that make their way to the house through illegal means can serve the people.

The premier further said that timing of video is not important and clarified that he would have used the video as evidence in cases if he had it in his possession earlier.
He regretted that the selling and purchasing of votes in the polls of upper house is continuing over the last three decades. He said the political parties which remained in power during this period did not make any attempt to stop these corrupt practices as this money also goes to the top leadership. He disclosed that several offers were also made to him in the past for the Senate seat.
Imran Khan recalled that it was he who expelled his twenty MPAs in Khyber Pakhtunkhwa for their involvement in the horse trading in the previous Senate elections. He pointed out that both the PML (N) and the PPP had made a commitment in the Charter of Democracy to hold the Senate elections
through an open ballot. He questioned as to why they are backtracking from
their commitment.

On the other hand, Prime Minister Imran Khan while addressing a ceremony in connection with the second phase of Ehsaas Kafalat, said that the government will facilitate small businesses to help the deserving persons and told that work on Naya Pakistan Housing program has been started.
He assured to fully support and provide social protection to the poor segments of the society.
The prime minister said the scope of Ehsaas Program will be further expanded
to meet the basic necessities of the deserving families.
Imran Khan said that seven million families will benefit from the second phase of Ehsaas Kafalat program. He said the disbursements will be made in
the most transparent manner without any favoritism or political basis.
The prime minister said the poor families will also be provided with health
insurance cards under which they will be able to get medical treatment worth seven hundred and fifty thousand rupees per annum. Apart from the cash assistance, the prime minister said the poor families will also be provided with assistance so that they could start their own
businesses.
Imran Khan said the students of deserving families are also being provided with scholarships including at the level of undergraduates so that they could also excel in their life. He said another program has also been started with the cooperation of an NGO to help the poor families build their own houses.