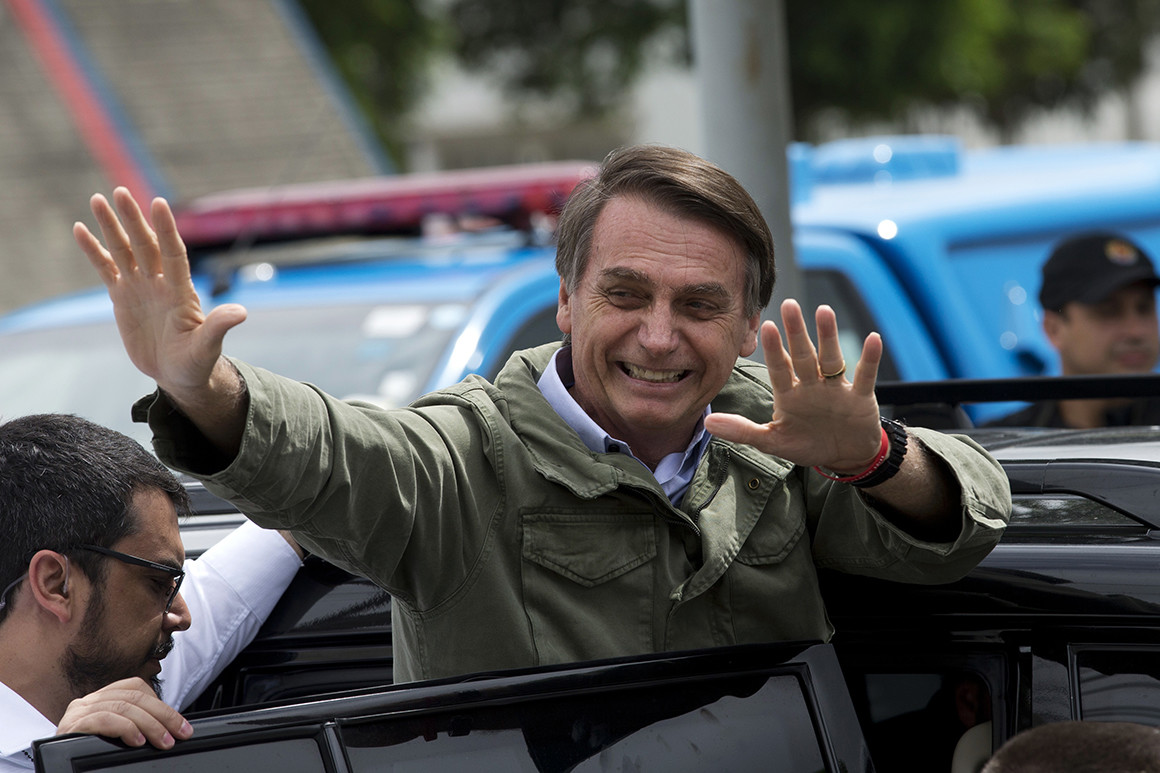 Two political events in two different continents this week underscore a worrisome trend. On Sunday, Brazil’s Jair Bolsonaro — a far-right firebrand who has expressed fondness for his country’s past military dictatorship — won Brazil’s presidential election. And on Monday, champion of liberal order German Chancellor Angela Merkel announced she would be resigning imminently as the head of her center-right party and stepping down from power completely in 2021. That coincides with the rise of anti-immigrant parties in her country and Europe more generally.

It’s the latest sign that status-quo leaders (who typically believe globalization leads to economic and social progress, for example) have lost their foothold. People from Europe to Latin America are increasingly concerned about their economic well-being and general safety, experts say. The problem is that it seems only fringe movements — especially those on the far-right — are the ones offering new solutions for how to meet those needs. “The center is thinning out and the left and right are filling the void,” says Alina Polyakova, an expert on far-right movements and European politics at the Brookings Institution think tank in Washington.

In effect, the kind of global governance espoused by centrist movements — the kind that promotes countries working together to improve the world’s economy and security — is severely under threat, and there’s little sign of that threat abating. After World War II, there was a US-led effort to create what is now known as the “liberal international order.” Countries basically agreed to give up some of their sovereignty and abide by global rules, mostly on how to stabilize the world economy and defuse tensions before a new war broke out.

Europe has taken this to heart. Nearly 30 countries have joined the European Union, which acts like one mega-country by allowing the free movement of people and money. The EU is one of the vanguards of globalization, where countries become more economically and politically linked over time. But the 2008 financial crisis, an uptick in terrorist attacks on the continent, and millions of refugees moving into Europe fueled a backlash to increased globalization. Fringe political parties in Europe that already believed in curbing globalization took advantage of that growing sentiment.

That led to Merkel’s downfall. For 13 years, she has promoted policies in line with the EU’s mission and global governance in general. Germans, however, clearly want change. Her coalition government, composed of a center-right and center-left party, handedly lost in two October regional elections. The leftist Green Party and far-right Alternative for Germany (AfD), meanwhile, both gained support. That continues a trend for the AfD, which finished third overall in Germany’s 2017 national elections. And so on Monday, Merkel said during a press conference that her days in power will end three years from now.

Germany is not alone in this trend. Hungary, Poland, Austria, Italy, and others have seen growing far-right movements. The historically powerful center-left Socialist Party in France lost big in the May 2017 national election and may take years to recover. And in Spain, the country’s traditional two-party, left-right structure has been upended by the emergence of two outsider parties. The fringe movements in Europe, then, may not be on the fringe for much longer. Voters in Brazil have grown frustrated with the status quo due to a slew of political and economic crises. The current center-right president, Michel Temer, is deeply unpopular in the wake of a struggling economy and a massive corruption scandal that has engulfed ministers in his government.

Temer took over for Dilma Rousseff of the Workers’ Party, who was impeached in 2016. Her leftist predecessor, Luiz Inácio “Lula” da Silva, is serving a 12-year sentence for corruption charges. He’s still popular in Brazil, and he tried to mount a reelection campaign from prison. But Lula was ultimately barred from running; had he been allowed to stand for office, he might have been the favorite in the presidential election. Under the Workers’ Party leadership, crime skyrocketed. And the country saw an average of 175 homicides a day in 2017 — a 3-percent increase from the year before. It’s perhaps not such a surprise, then, that Brazilian voters opted for a radical — if unpalatable — change. Some experts see Bolsonaro’s win as part of a greater trend in the region.

But Fabiana Perera, an expert on Latin American politics at George Washington University, isn’t so sure. Colombia this year elected Ivan Duque, a center-right politician. And next year the region will see presidential elections in Argentina, Bolivia, and Uruguay. “So far, no Bolsonaro-inspired politicians have announced their intention of running,” Perera says. The problem is voters in Latin America and elsewhere must feel that political institutions, usually protected by centrist leaders, are trustworthy — but fringe leaders continue to attack them.

The question now is whether the fringes will come become the mainstream and disrupt decades of global norms. Steve Bannon, formerly Donald Trump’s chief strategist, certainly thinks that’s happening. “The populist revolt now burns like a prairie fire from Europe to North America to South America,” he told the National Interest on Monday. “Real change is happening — worldwide — whether the establishment Party of Davos like it or not.” Of course, Bannon is working to usher in just such a future, so his assessment of the populist movement’s success is not exactly impartial.

Experts disagree with Bannon’s assessment. “The liberal order is under severe strain,” says Kori Schake, an international relations expert at the UK-based IISS think tank, but “the sinews of cooperative security and prosperity remain strong.” One person challenging the core of the liberal international order is the leader of its creation: Trump. “I’m a nationalist,” Trump said at a rally last week. “Radical Democrats want to turn back the clock. Restore the rule of corrupt, power-hungry globalists.” His rhetoric and actions, including cutting off immigration and curbing free trade, bruise any efforts to maintain the status quo.

So even if populist movements — whether left or right — have yet to take over the world, there’s very little sign that they’re going away any time soon. “The post-World War II international order was already fading,” Richard Haass, the president of the Council on Foreign Relations, said, “and these developments will only add to the unfortunate momentum.”

Centrist political leadership, which broadly governed world affairs for the last seven decades, is collapsing around the world — and potentially dangerous fringe movements are taking its place.