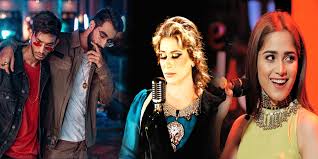 As per reports, the song was recorded in the voices of Naseebo Lal, Aima Baig, and Young Stunners. The video features Babar Azam, Shadab Khan, Sarfraz Ahmed, Shaheen Shah Afridi, Shaan Masood, and Wahab Riaz. The anthem will be available on the digital platforms of the Pakistan Super League while Pakistan’s leading TV channels will also broadcast the anthem.

This song expresses the love and closeness of Pakistan Super League fans around the world towards the game. The anthem also highlights the aftermath of the coronavirus, where stadiums are empty but fans are seen watching the match in front of TV screens in their homes.

“The blockbuster anthem of the sixth edition of HBL Pakistan Super League “Grove Meera” will help to connect the fans with the league, we have not compromised on the quality of this anthem, so hopefully, and this anthem will be appreciated by the fans in the country and abroad.”

“Legendary Naseebo Lal and pop star Aima Baig have an identity of their own. After the release of the anthem, the next stage is the arrival of cricket fans at the National Stadium Karachi and Gaddafi Stadium Lahore where they will get to watch thrilling matches,”

“A limited number of spectators heading to the stadium will now enjoy both Cricket Action and Groove Meera in Karachi and Lahore.”