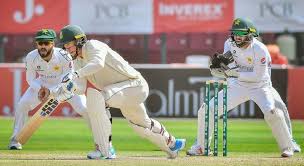 Rawalpindi: Day four of the second Test between Pakistan and South Africa brought with it plenty of twists and turns while being highlighted by a sparkling century from the in-form wicketkeeper-batsman Mohammad Rizwan, a maiden five-wicket haul for all-rounder George Linde along with a defiant display of batting from South Africa that made sure all three results were still possible as we move to Day 5 at the Rawalpindi Cricket Stadium in Rawalpindi. Chasing a mammoth target of 370 on a seemingly deteriorating pitch, the Proteas were 127 runs for the loss of just one wicket, requiring 243 runs for an improbable victory, as stumps were called on Day 4 on Sunday. Opener Dean Elgar started South Africa’s chase with a positive approach but soon succumbed to the bowling of pacer Shaheen Shah, caught behind by wicketkeeper Mohammad Rizwan, after scoring just 17 runs off 24 deliveries before the tea break. Pakistan bowlers must have been licking their lips at the prospect of inflicting further damage to the Proteas batting line-up but were met with stern resistance in the final session of the day.

A monumental unbeaten 94-run partnership off 197 deliveries followed between opener Aiden Markram and batsman Rassie van der Dussen that saw their side bat out the session and blow the game wide open. Markram scored a measured 59-run knock off 131 deliveries while Dussen proved capable of defying Pakistan with an unbeaten knock of 48 runs off 94 deliveries. South Africa require 243 runs while Pakistan require nine wickets for victory on a pitch that seems to have settled down making all three results — win for Pakistan, win for South Africa and a draw — possible. Earlier, South Africa started the day in need of quick wickets and spinner Keshav Maharaj quickly made his mark, picking up the wicket of tail ender Hasan Ali early, who was adjudged LBW after failing to connect a sweep shot, after the player had scored just 5 runs off 18 balls. Maharaj was on the attack and quickly forced an edge from tail ender Yasir Shah that was spilled by wicketkeeper Quinton de Kock, much to the dismay of the South African side. Shah had only scored 10 runs until then and Pakistan were still in a tricky situation with a score of 155 for the loss of seven wickets with a lead of 226.

Shah added 13 valuable runs to his tally before finally being removed by all-rounder George Linde, caught this time by Quinton de Kock behind the stumps. The 53-run partnership off 106 deliveries between Rizwan and Shah however helped Pakistan stabilize the innings and push for a massive total. The solid Rizwan was then joined by tail ender Nauman Ali and the duo wreaked havoc on the South African attack with a monumental partnership of 97 runs off 150 deliveries. The duo took the wind out of the bowling attack and scoring became easy as runs came all around the ground. Nauman Ali eventually fell to pacer Kagiso Rabada after scoring 45 runs off 78 deliveries. Tail ender Shaheen Shah could not stick around for a long period and was bowled by all-rounder George Linde, who completed a maiden five-wicket haul. The highlight of the session however was an unbeaten and emphatic 115-run knock off 204 deliveries by Mohammad Rizwan which led Pakistan to an impressive position in the second Test with a score of 298 all-out, setting up a target of 370 runs. Linde starred with the ball for South Africa with five wickets while Keshav Maharaj picked up 3 wickets. Pacer Kagiso Rabada contributed to the wickets tally as well with two wickets.