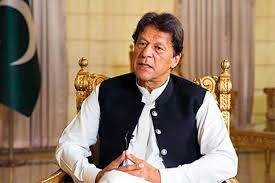 Islamabad: Prime Minister Imran Khan says government is determined for the development of agriculture sector and prosperity of farmers for which it will soon announce the biggest agriculture package of Pakistan’s history.

He was talking to Pakistan Tehreek-e-Insaf leaders, belonging to Sargodha, who called on him in Islamabad Friday.The Prime Minister said today growers of sugarcane, rice, and citrus are getting more profit of their crops, which is bringing prosperity to rural areas. Party matters, resolution of problems confronting people as well as welfare and development issues were also discussed during the meeting.

Those who called on the Prime Minister, include Osama Ghias Mela, Ansar Iqbal Haral and Major General retired Saleem Mela.

India stuck in a quagmire: Moeed