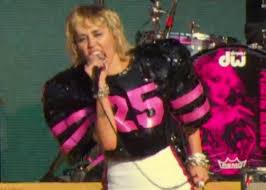 London: Miley Cyrus remembered Britney Spears and sent her an abundance of love during her pre-Super Bowl performance, two days after a controversial documentary about her conservatorship premiered.

The former Disney star gave a shout-out to Spears during her TikTok Tailgate performance at Super Bowl LV in Tampa, Florida.

“We love Britney,” Miley said while adding the singer’s name to the lyrics of 2009’s Party in the USA.

She later teared up and with emotions running high while singing the Wrecking Ball.

Miley also said that her 2013 hit is “about feeling completely broken and shattered.”

“Everyone’s suffering is different, even everyone’s threshold of pain,” she added. “I wear a lot of glitter and I wear a lot of armor and I also wear my heart on my sleeve, and it gets broken a lot.”