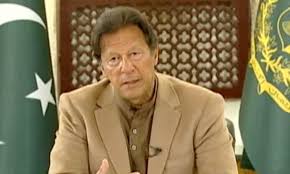 The calls were broadcast live on television and were moderated by Senator Faisal Javed Khan.

PM in the communication:

Pakistani citizens called the prime minister and asked questions related to different issues, including the coronavirus vaccine, issues of Balochistan and Gilgit Baltistan, inflation, the Opposition, and the concept of Riyasat-e-Madina, among others.

“According to a criterion that the government has set for the vaccination drive, (after frontline workers) we will inoculate people above the age of 60 who might have underlying health conditions.”

“We know that Gilgit Baltistan is facing electricity problems and we will soon build grid stations there,” the PM said.

“The political set up of Balochistan which has been historically followed damaged the province,” the PM said. “It is crucial to introduce a local bodies system there if we want to address their problems.”

“We will work on the development of Balochistan but people should be patient,” the premier stressed.

As against that, the PM claimed, only 0.2 percent of Pakistanis seek housing loans from banks.

“The government will provide a subsidy of Rs300,000 per yard for each house under the housing scheme,” the PM said.

“Giving the National Reconciliation Ordinance (NRO) to the powerful and throwing the poor in jails will only destroy the country,” the PM said.

PM Imran Khan said that “the biggest looters of the country came together and formed a union and these looters have been trying to pressurize the government for the past two years.”

“The country has been pushed into crises during the decade-long rule of the PML-N and PPP combined,” the PM said, adding that people expected the PTI government to come into power and change everything overnight which is only possible in fairytales. “It takes time to fix the problems of the country,” he stressed.

the PM said that “MNAs sell their votes in the Senate elections, and many people become senators by giving bribe. “

“Those who became senators by bribing others come to power to make money,” he said. “The PPP and PML-N said in the Charter of Democracy that there should be an open ballot system in the elections,” he said.