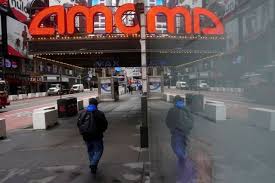 NewYork– Buyout firm Silver Lake disclosed on Friday that it sold its stake in AMC Entertainment Holdings for $713 million this week, capitalizing on a 10-fold rise in the price of the shares as traders organizing on social media platforms such as Reddit snapped them up.

The trade puts Silver Lake and its co-investors in the black following a $600 million convertible bond investment that the private equity firm made in AMC in 2018. Such an outcome looked unlikely when AMC, the world’s largest movie theater chain, was battling to stave off bankruptcy last summer, a move it avoided thanks to a debt restructuring deal with Silver Lake and its creditors.

Silver Lake was able to convert the bonds into shares thanks to the rally pushing AMC’s stock above the bonds’ conversion price this week.

AMC shares had dropped 70% in 2020 to close the year at $2.12, as many of the company’s movie theaters closed or operated with reduced capacity during the COVID-19 pandemic. But the shares ended trading at $19.90, as traders targeted heavily shorted stocks such as AMC and GameStop Corp. Silver Lake sold its stake over several open-market transactions that day, according to regulatory filings.

AMC itself also capitalized on the rally. It raised $304.8 million by selling shares this week. It is considering new moves to raise capital through stock sales, sources told.