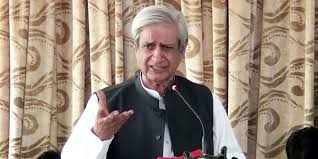 ISLAMABAD: Minister for National food Security and Research Syed Fakhar Imam said that government would provide subsidized seed for cotton growers in order to revive and enhance local output of major crop of the country.

Addressing a seminar held here to discuss the issues and challenges faced by the local cotton crop and aspects to enhance productivity for economic development of the country, he said that cotton was one of most important crops in the country, which contributing about 19.03 percent in National GDP. He stressed the need for ensuring the crop zoning in order to stop farmers from switching to other crops which would be largely beneficial for agriculture sector development and economic growth.

He was of the view that declining output of cotton from last many years was a matter of concern that required serious attention to revive it on sustainable basis and economic uplift of the country. The minister said that unavailability of high yielding, certified, hybrid seed varieties were the main hurdle in domestic output, besides provisions of pesticides to control the pest attacks, which every year destroy crops standing over millions of hectares. He said that cotton crop development was vital for attaining economic growth and social prosperity, adding that to achieve the true crop production potential use of hybrid varieties were much required, besides it needed to replace with conventional seeds.

The minister stressed the need for revamping seed production technologies in order to enhance per-acre crop output and maximize farmers’ income to complete in international markets as well as fulfilling the domestic raw materials needs of the industry. Cotton crop was grown over 3.8 million acres in Punjab and 1.6 million acres in Sindh Province, he said adding that last year a vast area in Sindh under cotton crop was damaged due to pest attacks. The local farmers were far behind in term of income as compared the farmers of other countries, he said adding that the local farmers received Rs 40 to 50 billion less per annum form international markets as compared to farmers of other countries. He informed that local seed requirements were estimated at 40,000 tons and government would provide subsidy on cotton seed for enhancing local output. Besides, he said that all possible resources would be utilized for the development of agriculture sector and prosperity of farming community in the country.